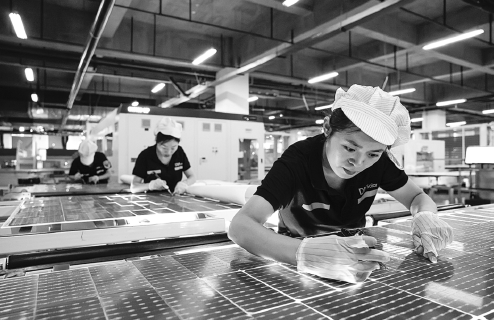 China's advances in new energy development have won it the opportunity to lead the creation of international standards for new power systems, which will further accelerate the global transition to a low-carbon energy structure, experts said.

The new power system takes wind, solar, nuclear, biomass and other new energies as mainstays while fossil fuels will serve as supplements.

The comments came after the International Electrotechnical Commission recently proposed for China to lead in formulating the global standard framework of core technologies in the world's first new power system, and to accelerate low-carbon transition of the energy sector.

The commission said China has led the world in terms of new energy installed capacity and power generation for many years. The country's industry scale and market size of wind power, photovoltaics and lithium batteries have also ranked first in the world.

China's role in the research of the framework is key to the global energy transition, it said.

"With China's plan to scale up wind and solar power installations in the Gobi Desert and other arid areas, as well as the country's commitment to peak carbon emissions by 2030 and reach carbon neutrality by 2060, the country will see an increasing proportion of new energies used for power generation," said Lin Boqiang, head of the China Institute for Studies in Energy Policy at Xiamen University in Fujian province.

"Different from fossil fuels, new energy power generation poses higher requirements for the safe and stable operation of the power system because most new energies are intermittent resources, which experience rapid and random changes that make it hard for stable and steady power generation, causing volatility in voltage and frequency disturbances in grid operation. As a result, it is necessary to develop new power systems to meet growing demand buoyed by increasing new energy installations," Lin said.

The China Electricity Council said by the end of July, total installed capacity of non-fossil energy was 1.19 billion kilowatts, up 14.7 percent year-on-year, accounting for 48.3 percent of the total.

Orient Securities said with extreme weather posing bigger challenges, expanding new energy in power generation and continuous changes in the power consumption, construction of new power systems will be imminent and the industry reform is likely to accelerate in the second half.

The establishment of new power systems will spur demand for smart power networks, virtual power plants and power trade, and boost investment in these sectors, it said.

Zhejiang Daily said an estimated 20 billion yuan ($2.89 billion) has been arranged to this end, and related application procedures have been facilitated.

Li Gengfeng, a professor at Xi'an Jiaotong University, told China Energy News that China's first regional new power system will come soon and the industry is likely to see an accelerated pace of reform in the second half.

New energies will replace fossil fuels and become the major source of power generation in northwestern areas in 2022 thanks to the nation's efforts in the areas. State Grid's northwest branch will boast a power network that has the largest new energy installations, playing a major role in building the nation's first new power system, Li said.

Lin from Xiamen University said wind power and photovoltaic energy will take up the largest part of the new power system. Other major parts of the system include electric vehicles, power storage, hydropower, smart grid, and carbon capture and storage (CCS).

Lin said EVs will ultimately replace those powered by gasoline. The promotion of the smart grid and power storage will help mitigate the fluctuations in new energy power generation and transmission, and CCS will help ensure the goal of carbon neutrality as the new power systems require a certain proportion of fossil fuels that will produce emissions.